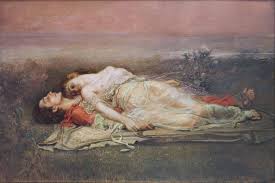 1979 was my A-level year. Also the year I discovered Richard Wagner.

We had one good stereo system in our sitting room which pumped out rock, pop, jazz and classical at all hours, to all corners of our Victorian house in Barnes.

One Sunday afternoon, hunched over Frank Wedekind’s play, Frülingserwachen (Spring Awakening), I heard a slow, rising, crescendoing soprano voice drift up the stairs to my bedroom at the top of the house. Liebestod, Mild und leise, from Tristan and Isolde, was my first introduction to Wagner. Never had I heard anything so sweet and so gut wrenching. Isolde’s climatic cries ran right through me. To say that I was blown away is an understatement.

Some people find Wagner excessive, his operas too protracted and let’s not even talk about his moral and political shortcomings! There is no doubt that he was complicated. He did hold anti-semitic views and yet had close Jewish friends. His step-father meanwhile, was not only rumoured to be his true father, but also Jewish. Hitler’s championing of Wagner after his death, did the composer no favours of course.

On the music front, Wagner was and is phenomenal. He revolutionised opera, injected it with high drama, and by doing so, he really made the singers live their roles. His music  was not only romantic and rich, it was multi-layered and exciting, his haunting recurring leitmotifs, climatic highs, took opera to another level.

Despite being seduced by his music from an early age, I am no connoisseur. There have been few fully staged Wagner operas on offer in the UK for the past few years. However I was heartened by the news that Tristan and Isolde is coming to ROH in April 2020. This coupled with semi-stagings of the RingCycles at the Festival Hall, set for 2021, is an exciting prospect.

So it was with great interest that I came across the Wagner Society Singing Competition last week. The final was to take place at the Wigmore Hall.  Prizes and bursaries were on offer, also the chance for the winners to travel to Bayreuth to sing on the prestigious Student programme. Each of the finalists were to perform a piece by Wagner and a second one by a composer of his or her choice.

At the Wigmore, I perused the programme which stated that 2019 had produced a record number of participants. The biographies revealed three sopranos, two baritones and one tenor who had made it to the final seven. I looked round the art and crafts auditorium,  and thought I spotted Hugh Canning, Sunday Times music critic and one of the judges, up above in the balcony looking down on us mortals.

Out stepped the first entrant, James Corrigan, Scottish baritone. Corrigan sang Wolfram’s Act 2 aria from Tannhäuser, where Wolfram performs in a singing competition at the medieval court of Wartburg. (Might Corona have chosen this aria for this reason?) It is a simple aria about holy and courtly love. Corrigan’s baritone was pleasingly golden, his performance discrete but assured and in character.

Lucy Anderson, who followed, sang an engaging Eva from Die Meistersinger Quintet, with lovely rises, hitting the top notes confidently, but it was her Magda in Menotti’s The Consul that showed her true grit. This opera, conceived at the height of the Cold War, is drama personified and not out of place in a Wagner competition. A sample of the libretto below…

‘Started crying and I couldn’t stop myself

I started running but there’s no where to run to

It was a challenging sing, a brave choice, but Anderson has the personality to carry it off. Look forward to seeing her Tatiana in Tchaikovski’s Onegin at Opera Holland Park 2020, where she’ll be taking part in the excellent young artists’ scheme.

Dominic Bevan’s interpretation of Lohengrin’s Farewell, In fernem Land was sung with fervour and great delicacy. The tightness in Bevan’s voice, brought about by nerves, made his performance all the more touching and moving.

The very elegant mezzo-soprano, Yuki Akimoto, a vision in red this time, brought gravitas and tremendous feeling to her Isolde role, performing Mild und leise to perfection.  I had come to the competition hoping to hear it and I was not disappointed. A very professional and assured performance. (Just the over enunciation of German ‘d’, ‘t’s in English, which needed toning down a bit)

Baritone, Jolyon Loy, has a beautiful baritone, but at the competition his talents didn’t come to the fore, lost between two spectacular soprano performances. I have since listened to him on Youtube and I think you will all agree, he is going places https://www.youtube.com/channel/UCeNhc7NamgMbnT56_-Btq_A Here he is singing Wolfram’s aria, O du mean holder Abendstern, which he sang at the competition.

Finally, I need to take a breath before announcing this young woman. She is Ukranian, petite with a  sublime voice! Her Wagner aria was superbly executed but it was singing Verdi’s Ave Maria (Otello), that Nataliia Temnyk brought the house down! Goose bumps, heart racing, I dropped all my papers when I rose from my seat.

A remarkable event and at my time of writing I still don’t know which singers will be making their way to Bayreuth next summer!

The Wagner Society. Only £30 to join up for the year for which you enjoy great perks. https://wagnersociety.org