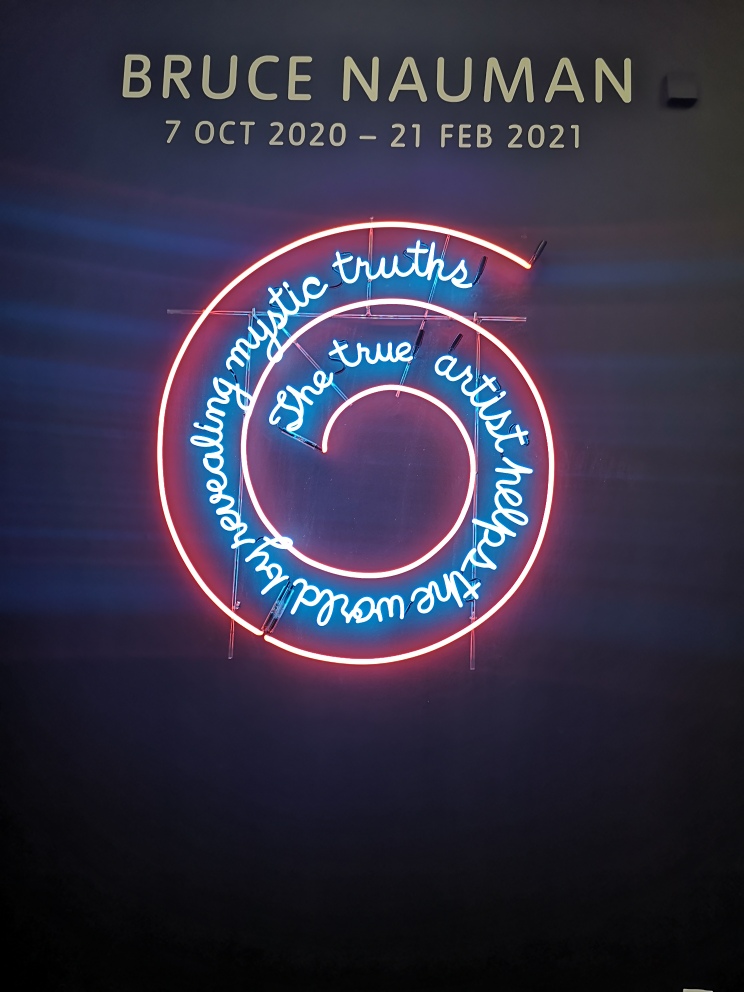 Bruce Nauman is a name in the art world but to date my knowledge of his work was scanty. Having seen his beautiful neon creations I was keen to know more.

Before my Tate visit I sought out videos of him on the internet. One of him addressing a crowd in a Swiss gallery caught my attention. He came across as shy, hesitant, witty and very grateful to those who had supported him in the early years. Conceptual art is a hard sell when you’re first starting out. Before MOMA New York, the first to ‘get’ his cerebral creations of the late 1960s, were his European patrons and their institutions.

Bruce Nauman at Tate Modern, is the perfect opportunity to see a range of his work spanning fifty years.

Annoyingly, I found on reading the press notes for the show, that it was to be theme-based. In other words it was going to jump around chronologically and there’s one thing that unnerves me, is shows arranged thematically for a solo artist. Am I the only one to feel that way?

At the entrance hung an early neon work (see header pic) “The true artist helps the world by realising mystic truths” – the typography was as pretty as the sentiment. Was the statement ironic or a reflection of the pressure Nauman felt to produce something sensational and meaningful when he was starting to exhibit his work?

With this in mind I stepped into Room 1, where seven video projections of Nauman’s studio in New Mexico were on display. Fixed cameras had captured the minutiae of nocturnal life in the artist’s messy studio. Rubbish, metal cabinets and filthy chairs dominated. Out the corner of my eye, I caught a rapid movement of light flitting across the studio floor. Yikes a mouse! Unnerved, I fixed on a pair of paint pots, except they couldn’t be, Nauman reportedly gave up paint in 1966! My gaze moved across to another projection of the studio. This time the furniture was upside down. Aside the different perspective I saw no other creature. Frustrated, I moved over to the rather elaborate title for the piece. Mapping the Studio, flip, flop and flip/flop (Fat Chance John Cage) 2001.

Having written a piece on the experimental composer John Cage, I started to understand. In silence, we notice everything, sounds, tiny details. But as Nauman points out, don’t fixate on one thing. You will miss the big picture. “You have to kind of not watch anything, so you can be aware of everything” states Nauman. That’s very buddhist and very John Cage!

In another room of early works I had a chuckle watching a film entitled Walk with Contrapposto 1968. A figure walks through a narrow corridor torso twisted from the hips. The pose originated in Greek sculpture to make statues appear more dynamic. Nauman’s obsession with body and awkward and exaggerated movement is treated in other films at the show. Absurdly funny or plain mad. What is sure is that you have entered Nauman’s unique and absurd interpretation of the world we live in.

On an aesthetic level I appreciated Nauman’s hand sculptures 1996 which were interestingly “untitled”. Also his Henry Moore Bound to Fail 1967/70 sculpture, though it was not particularly well displayed. It could have done with some lighting. We are presented with an iron casting of Nauman with his hands tied behind his back. At the time, young British artists were considering Henry Moore as not the god he was made out to be. Nauman clearly didn’t agree.

Puns and language associations feature heavily in his memorable neon signage. At the exit a whole wall of  neon words light up then leaves the viewer in darkness. Two words flash at a time, telling you how a life can be lived; at least this what I thought it represented. I hadn’t read the title : One hundred live and die 1984 evoking the incarcerated and killed. I prefer my interpretation: “Scream and Live” (in blue) or “Scream and Die” (in pink) sums up a life doesn’t it?

A disturbing aspect of the exhibition is Nauman’s exploration of torture, sometimes so simply evoked. Two broken metal chair hang with a steel girder : Musical Chairs 1983. Particularly eerie was Clown Torture 1987 – a clown under pressure babbles nonsense. Most bizarre and disturbing was Shadow Puppets and Instructed Mime 1990. A film runs of a female Marcel Marceau in costume with cropped hair. With an apprehensive, child-like expression on her face she waits sitting on a chair. A Big Brother voice instructs her to get off the chair, roll on the ground etc. At one moment, she appears mischievous and tries to squeeze through the chair legs and is instantly stopped from doing so by the voice. Two wax casts of heads suspended on a cable hang in the corners of the room!

The message of art being squeezed and ordered around is chillingly apt at present.

A thought-provoking and profound show.