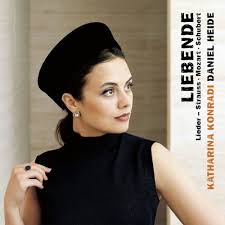 You may be forgiven for not having heard of soprano, Katharina Konradi. Brought up in the mountainous republic of Kyrgyzstan, Konradi left her homeland in Central Asia in her teens, to go and live in Germany. Since then her star has been steadily rising, in Europe mostly. Her successes in singing competitions has earned her employment in Germany’s best opera houses, and she is presently part of the Hamburg State Opera ensemble. Radio 3, always on the lookout for international talent, discovered her way back in 2018 and invited her onto its New Generation Artists Scheme. Last year she was invited to perform in a live-streamed event at the Wigmore Hall but for many of us, last year was a musical blur, thanks to Covid-19.

On her new album Liebende, in which she sings Richard Strauss, W.A Mozart and Franz  Schubert, I am happy to confirm that she is simply magnificent.  However, it has taken me a while to really appreciate the album, slowed, as I have been, by my limited German. The songs in sleeve notes were entirely in German. I had to check several Lieder websites for the English texts, which for one reason or another took me an inordinate amount of time.

But all is forgiven Katharina and I am glad I persisted!

On the surface, Strauss, Mozart and Schubert lieder can sound quite similar, at least in their melodic style. But of course, each composer will bring their own magic, their own frill, to the musical pot.

Opening the album we have Richard Strauss’s Die Erwachte Rose/The Awakened Rose(1880). As far as lieders go, it is the simpler sort, but nonetheless, it provided a perfect platform for Konradi to display her light lyrical sweetness of voice. Konradi’s high notes unfurl rather like the blossoming bloom they are evoking, and they have that marvellous clean ring to them.

Leises Lied/Gentle Song (1898) by contrast was a mysterious work by Strauss.  Supremely seductive, it was the tale of secret trysts and love in a garden at night. In the old well’s waters are reflected the stars, but also the lover’s eyes. The narrator no longer can see his lover and the yearning translates into a wild exploration of minor keys and much tonal inventiveness.

Mozart was a welcome addition for me on this album since I hadn’t heard his lieder before. Abendemfindung/Night Thoughts (1787) especially, which could be an aria from one of his operas. I loved hearing that trademark Mozartian sudden shift from minor to major and back to the original minor key.

There are two interlinked songs on the album, one Das Lied der Trennung/Parting Song by Mozart, and Luisens Antwort/Luisa’s Reply, which Schubert wrote years later, as a response to Mozart’s work. I’ll leave you to discover what binds them!

The Schubert works were the most riveting and dramatic on this recording. For one thing the piano part is that much more developed. In parts, it is as important as the vocals, such as in Die junge Nonne , where Daniel Heide’s play is taut and suspenseful and skilfully highlights the tension. Konradi’s vocals were equally disciplined, which made the final Alleluia all the more beautiful.

Equally good were Suleika 1, where Konradi’s voice displayed all its vibrancy and freshness, also the very moving Verklärung/Transfiguration.

By the end of it, I was very sorry to have missed Konradi at the Wigmore, judging by the quality of this recording. Highly recommended for lieder lovers and a recording which showcases Konradi’s particular affinity for the art song.

Liebende Lieder – Strauss-Mozart-Schubert out now on Avi-music and available on other musical streaming services.