In which your humble reviewer is left asking questions.

When Michael Jackson’s ‘Thriller’ video launched in 1983 it was a major media moment at a time when media moments were still a rarity. David Dimbleby, no less, introduced it on British TV, and back then in the 80s it blew our little sparkly socks off. Conversations in the office were about nothing else for days. Then came Bad, which made us all smile, because no matter how much the Peter Pan of Pop sexed himself up with codpieces and grabbed his crotch, we knew you weren’t really, Michael. No bad boy, but Lord, you could move, and that voice, which always seemed about to crack out of its register, punctuated with all those babyish little gasps, was unique. Then, somewhere between Bad and HIStory, the slave – you know, the one who sits behind the Emperor, whispering ‘Remember Caesar, you are only mortal’ – got kicked out the chariot, and it all went a bit weird. There were the first rumours, then the first allegations of child abuse. The albums still sold in their millions, but then so did Liberace’s. There was the overblown unwitting self-parody of ‘Earthsong’ at the Brits in 1996, where Jarvis Cocker leaped on stage and did what we were all thinking. (One of the exhibits at the NPG is the ‘Earthsong’ video, scrolled backward, which is about the kindest thing to do with it.) There were more allegations of child abuse, and a court case, where those of us who remembered Thriller and Bad were presented with what Peter Pan turns into in middle-age – anorexically frail, pop-eyed, with wiggy hair and a tiny scared white face ruined by plastic surgery. It was awful. You could have foretold then and there that the end was nigh.

The NPG’s new show spends very little time on end-stage Michael Jackson, which is understandable, although in a show that is about image, is an obvious and very white elephant in the room. It’s not biographical, and it’s not about memorabilia either, although it does include the ‘Dinner Jacket’, tinkling with miniature cutlery and as small, up close, as historical costume. So it misses that sense of being closer to the star that the V&A achieved in its Kylie and Bowie shows. According to the NPG’s new(ish) director, Nick Cullinan, the inspiration for the show came about almost as an epiphany, when he realized the number of artists who were inspired by Michael Jackson’s staging of himself; in which case it’s odd that quite so many of the exhibits were created in response not to Jackson live and in full and glorious flower, but to Cullinan sending out what sounds to have been almost a call for entries. There was a lot of newspeak at the press view, in that slightly desperate tone resorted to when an exhibition doesn’t quite add up, of how Jackson’s image-making is ‘an interesting phenomenon to think about.’ Really? In what way, and what are the Gallery’s thoughts? Maybe the catalogue explains them – it would be fascinating to read Zadie Smith’s thoughts on Jackson, especially – but at the press view, the shop was still being put together, and the catalogue unobtainable. Note to whoever is in charge of the commercial side of the Gallery: having your shop ready for the press view is Museum Retail 101.

The show also aims to bring in a new and younger audience, which Lord, knows, the NPG could do with – visitor figures have collapsed to the level they were at nearly twenty years ago. There have been redundancies, questions asked. Asked they will be still. All galleries want to attract that new and younger audience – the museum demographic is like a slide rule with the top end fixed while the other constantly seeking to fall lower and lower – and it’s a praiseworthy aim, but is Michael Jackson really the way to do it? The show opens in the year when he would have been 60 – this is not Ed we’re talking about, not Kanye, not Taylor. This is an entertainer as remote from most 18-25 year olds as Vera Lynn was from me. And one that in his deracination of himself is a pretty compromised figure too. What would have become of him in the age of #metoo is best left unguessed. 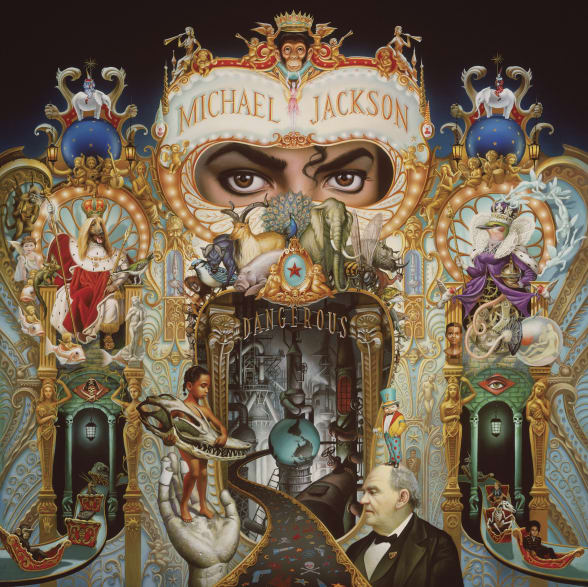 Dangerous by Mark Ryden, 1991. Courtesy of the artist and Paul Kasmin Gallery.

On to the exhibits, however, as they’re what it’s all about. There’s a Haring, a Warhol, a Grayson Perry, a Maggie Hambling – most of the other artists will be much less familiar. Precious little here for the core audience of NPG visitors; they will have to wait for the Gainsborough show in the autumn. What there is, is kitsch, which is both colourful and fun, although at times the show does feel a bit thin – video art is large-scale, obviously, but to have quite so many spaces devoted to a single example of it makes the show feels like one of those essays padded out with quotes from other people; and all of the spaces are way too small for the music bouncing around distortedly amongst them; even at the press view you could hardly hear yourself think. There’s a huge green Michael, and a small grey one; heartbreaking reminders of how cute he was as a kid, and how handsome as a young man. The infamous Jeff Koons sculpture, the kind of exhibit the show is crying out for, is there only as the background in a photograph; and Mohammed al Fayed’s irresistibly awful statue of Jackson, which used to stand outside Craven Cottage, is missing too. David McCarthy’s drawings suggest he saw Jackson as Pinocchio, which is thought-provoking, if rather cruel; David La Chappelle’s Beatification (‘We persecuted him, every person who ever bought a tabloid or watched the news…’) equates Jackson with Princess Diana. There is a heck of a lot of religious imagery in the show, but the Gallery’s interpretation lets this go almost unremarked; in fact it’s as if there’s a whole layer of comment simply not attempted here. The visitor is dutifully told what they are looking at, the circumstances in which it was made, what the artist thinks of it, but curatorial explication or interpretation is waveringly uncertain and hesitant, or absent altogether. The High Gothic hubris of Dangerous by Mark Ryden, for example, cover art for the 1991 album, in its astonishing Hapsburg Empire frame, could fill a book on its own. Likewise Kehinde Wiley’s 2010 Equestrian Portrait of Jackson as Philip II of Spain – one of the few works that is contemporary with the singer himself, even if it was finished posthumously. You find yourself pondering stage costume as armour, then image-making as a whole as armour, and struck by the poignancy and subtle truth in the fact that the face atop the body is not that of Jackson as he was in 2010, but that from the height of his career – lightly tan, crisp-featured, alert and wary. When you’re dead your image belongs to everyone, but how could any artist add anything to Michael Jackson’s image-making that he hadn’t in fact already done to himself?

Michael Jackson: On The Wall is at the National Portrait Gallery from 28 June until 21 October.