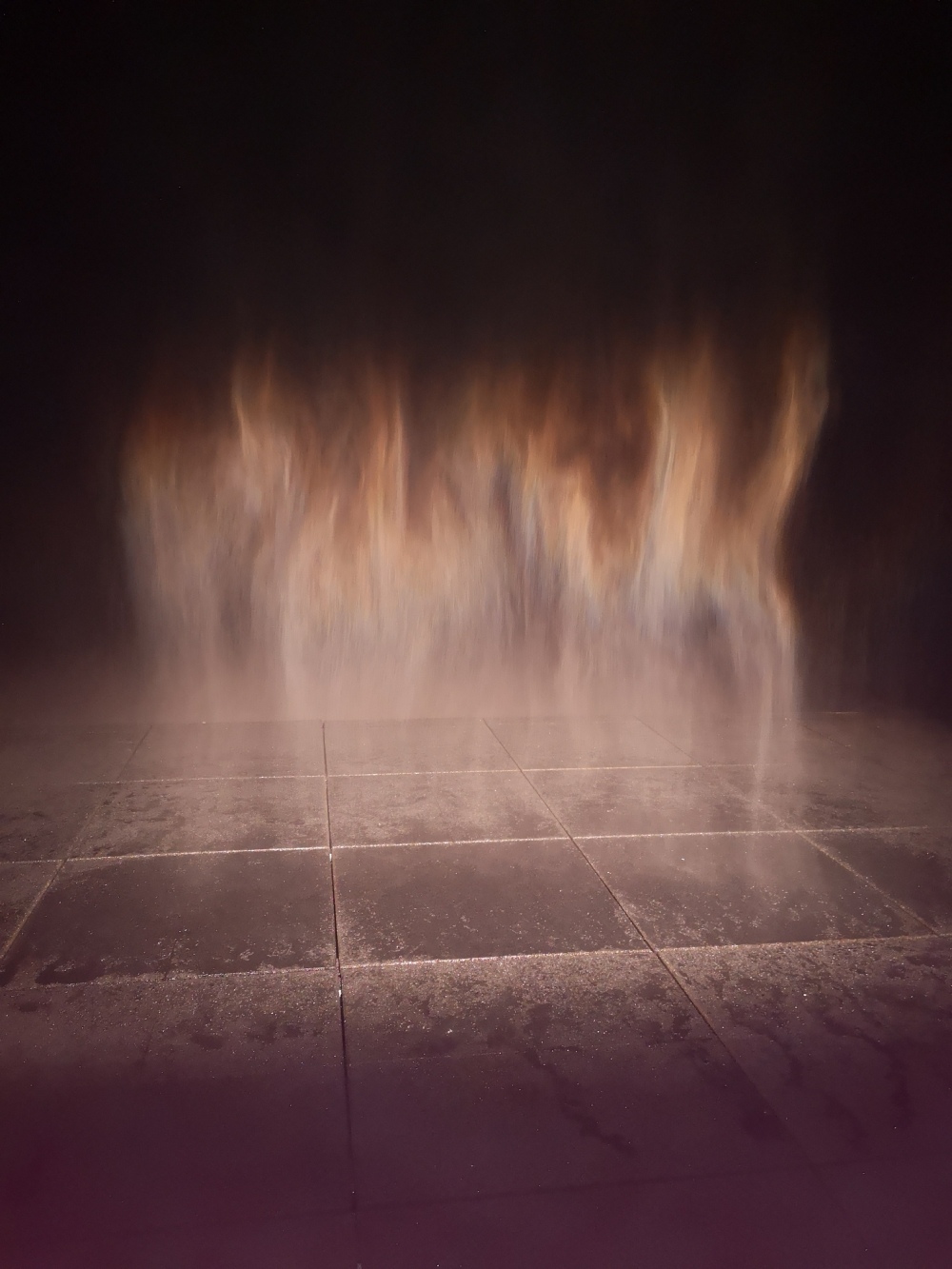 A trip to the Tate Modern almost always involves me taking a left at the Turbine Hall where I know I will end up in familiar art territory, one which preferably involves paint! Going right on the other hand, into the Blavatnik Building, constitutes more of an art departure for me: tech art and design installations, dating from the 1990s, is often a step too far, but I figure that if I don’t try these things, I will age and get more set in my ways a lot faster!

And of course it was Olafur Eliasson’s solo show I had come to see, the artist who brought the sun to the Tate Modern in 2003.  HIs construct, required hundreds of lamps and lit up the Turbine Hall for 6 months. Amazingly it attracted 2 million visitors, most of whom returned many times. They had not only come to bask in the sun’s light but to lie back and gaze narcissistically at themselves and at others, in a large mirror installed above their heads. This installation not only transformed the austere Turbine hall into a friendlier place, but it also initiated another type of art, one which brought total strangers together.

Having listened to the Danish-Icelandic artist speak so eloquently about his latest artistic projects, his concerns for the environment and his love of human connection on radio, I wanted to see the art and design that accompanied the talk.

I walked out of the lifts floor 2 and was assailed by harsh, yellow strip lighting at the entrance to the show and also circled two multifaceted rotating orbs projecting their calm, mesh-like shadows onto the ceiling. The bulk of Eliasson’s work is inspired by the natural world, the earth and the elements such as light and water. Also maths. I entered a dimly lit room and peered into a vast glass cabinet. Hundreds of exquisitely fashioned, intricate, geometrical sculptures of paper, wood metal, marked Elliason’s collaboration with architect and mathematician Einar Thorsteinn (1942-2015), all prototypes for some of his architectural installations which are to be seen throughout the world. 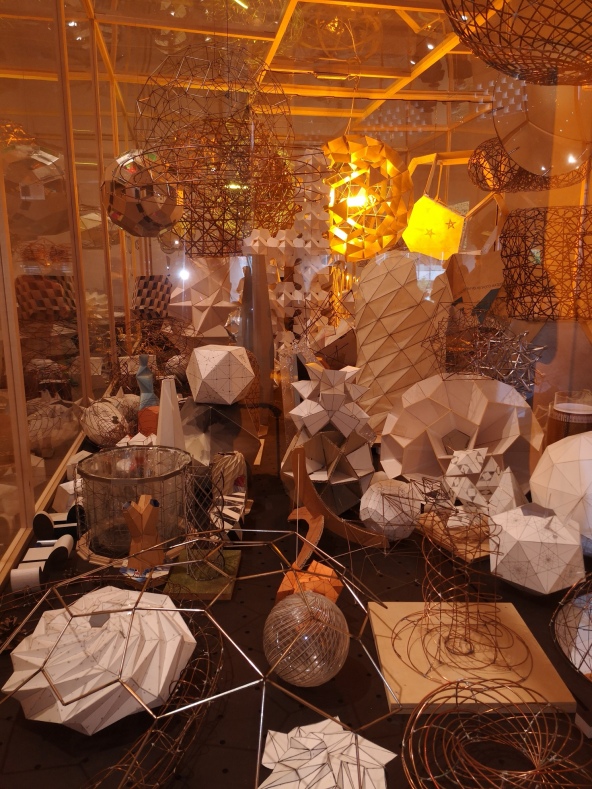 Room 7 entitled ‘Glacial works’ particularly impressed and moved me. Eliasson’s childhood experiences in Iceland and his preoccupation with the melting of glaciers has led him to produce Glacial spherical flare 2019. The circular dish on the wall, made up of rock particles created by glacial erosion, is composed of gorgeous green, gold, ruby disks. In the same room a sculpture entitled The presence of absence pavilion 2019, was a bronze cast of a ball of ice now disappeared. The sculpture was both delicate and devastating in its message. 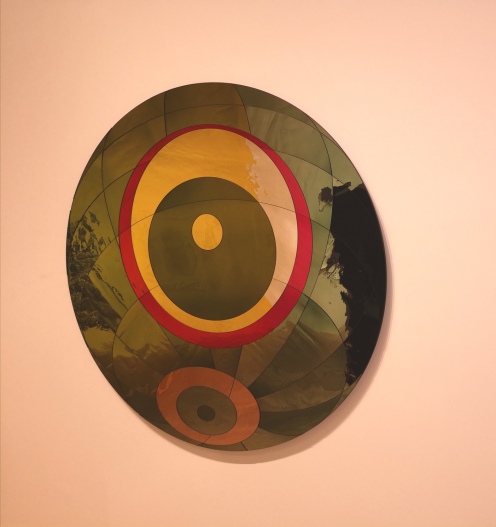 Eliasson is also interested in our perception of our world and our senses. Many of his installations use reflections, inversions, after-images and shifting colours. Water installation, Beauty 1993 (see Heading Image) took us into a moist cave-like interior. Iridescent violets and pinks flitted across the fine water spray. As we moved around the room, the rainbow colours came and went.

The colours of the spectrum also featured in Your uncertain shadow (colour) 2010, as our pink, violet, green, yellow silhouettes were projected onto a wall and moved with us. I was pleased to have sped past the convoy of journalists on the guided tour, who were told not to linger in the space simply because they would have blotted out everyone’s silhouettes! The room works best if you are three at the most! I am not sure how this show is going to be policed as this was not the only room where numbers need to be controlled.

Two simple pieces moved me the most and belonged together: a burning candle on a small, circular mirror entitled – as I grew up in solitude and silence 1991. The other a tall ‘rain’ window where rivulets of water streamed down continuously. Side by side they conjured up a slightly dull but peaceful rain-washed afternoon in childhood when one is left to flick through a book. This is probably Eliasson’s child growing up in Iceland but it is also all of our childhoods.

I found this an inspiring exhibition. Nothing felt arbitrary or gimmicky as it could be with this type of modern art probably because the craftsmanship was a consequence of years of experimental work, discussion and artistic collaboration. It had soul and meaning. And, there is no doubt about it – I felt connected to others viewing the works, especially in the fog tunnel.

In the last few metres of the Din blinde passager (Your blind passenger) 2010 installation, I nearly knocked over a young man with a notepad. He looked up in surprise at seeing me suddenly appear through the fog. ‘I’ve been here for quite some time,’ he quipped. He had just heard me talking to a fellow woman traveller in the tunnel about heaven and end of life experiences. I laughed nervously, now desperate to get out of there! The fog tunnel is not for the claustrophobic!

A thought-provoking and beautiful show and good one to experience with friends and family. But try to go outside peak viewing times as the queues may be great for certain installations.

Olafur Eliasson: In Real Life is on at the Tate Modern until 5th January 2020.