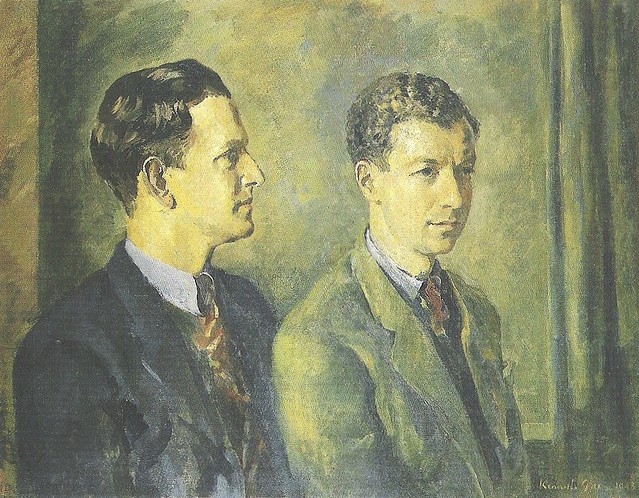 Portrait of Peter Pears and Benjamin Britten  by Kenneth Green 1943

The voice is an extraordinary thing. Air pumped from our lungs, passes over the fleshy folds in our throat, to emit a full spectrum of sounds. Some more pleasing than others.

Last weekend I shouted and screamed so hard at a football match that I I woke up hoarse!

Professional singers cannot afford to lose their most precious asset – their money spinning, life-enhancing, voice. They will go to great lengths to protect it and spend decades training it to be as versatile as possible; to weather all musical challenges.

And even then they worry: When I interviewed star baritone, Jacques Imbrailo, at the Royal Opera House recently Interview: Star Baritone Jacques Imbrailo , Imbrailo talked about what many professional singers at all levels feel about contemporary music, that it has to be handled with great care.

New operas are sometimes frustrating to prepare for, rhythmically and harmonically. For him the old composers wrote better for the voice. This didn’t stop him earning himself great reviews in Britten’s Billy Budd both at Glynebourne and at the Royal Opera House.

Benjamin Britten, although not absolutely modern (he died in December 1976) had a way of testing his singers, notably tenor Peter Pears, who was also his life partner.

On September 21st, I attended the opening of the Kensington Olympia Music Festival of Music and the Arts  (KOFMA) where an ambitious programme of Britten Song Cycles had been chosen to wet our palates this season. It was an interesting choice of programme, for not only are Britten’s songs a challenging sing, but they are not always easy for audiences, unfamiliar with the work.

I had never heard Seven Sonnets of Michelangelo, which Britten wrote in 1940 during his time in the United States. Britten dedicated it to Peter Pears, who was much daunted by the prospect of singing the work which required formidable agility in the vocal range. Pears, who was at the beginning of his career, gave himself time to prepare, and didn’t sing Seven Sonnets of Michelangelo in public until September 1942 at the Wigmore Hall.

At the KOFMA opening I attended, James Black’s tenor voice, with its warm, rich tones, were gorgeousness incarnate. Perfectly suited to sing Britten’s extended love letter to Peter Pears, Black’s performance had however two tiny chinks. Several squeaks after he had hit certain notes cleanly. I am no expert on why this happened but these so-called slips added authenticity to the anguished emotions Britten was endeavouring to express. Black’s performance is one which I will remember – it was so emotionally charged.

Young soprano (22 years of age) Bonnie Callaghan sang On This Island. Of note was the achingly beautiful Nocturne which she sang to perfection.

The high point of the evening was Britten’s late work Phaedra which he dedicated to Dame Janet Baker. Its full title is Op.93 Dramatic Cantata for Mezzo-Soprano. And dramatic it is. It not only requires virtuosity with the voice but fine acting skills. The audience needs to believe that the singer is Phaedra, married to Theseus and in love with her step son Hippolytus, and suffering much on account of the shame she feels for transgressing social mores.

If anyone was going to pull off the work, it was Irish mezzo-soprano Laura Lamph. I have been following her career with interest for the past five years. As a solo artist she has taken on operatic roles such as Dido in Purcell’s Dido and Aeneas. Dido must have prepared her psychologically for Phaedra, (Dido and Phaedra are tormented queens who both decide to take their own lives). Dido however is an easier sing.

On the evening in question in St Peter’s Church, Lamph’s performance was quite mesmerising. She came to the stage, her face whitened, her black eye-liner accentuating Phaedra’s mad, staring eyes. Without stage props or orchestra, simply a piano to accompany her (the accompanist Miles Lallement is the best in the business) the audience was transported inside her tormented mind.

There is no doubt, Phaedra is an exciting challenge for the mezzo willing to throw herself into the role. It is not for the faint-hearted.

In the end, it is up to singers to decide what roles they want to take on and how they want to sing them. Or is it? Singers are not always in a position to choose. They need to earn a living and put food on the table.

Curious to see how one prepares for a virtuosic, ‘difficult sing’ in this case, Benjamin Britten’s Phaedra, I went to talk about it with Laura Lamph the following day of her performance.

Why did you decide to sing Britten’s Phaedra?

I had originally thought of singing a selection of Britten folk songs but it was suggested by my teacher (Ashley Stafford) and accompanist Miles Lallemant that I should think about singing Phaedra. I thought, why not use the opportunity to challenge myself and the audience.

What did you think of it at first and what made you think you could do it?

I listened to Janet Baker and Sarah Connolly perform it and I thought, Wow, that is class – I need to sing it. I had a few concerns about the fact that it is quite high as I am not always keen to use the upper limits of my voice. My other thought was whether it would work with piano but I chatted with Miles and we decided that for this particular occasion it would work.

Interesting question, It depends on why it is difficult. Because I am not always in control of the repertoire I perform, I sing quite a lot of difficult music, sometimes I don’t love it all. Basically, I like it if it is worth the effort involved in learning it! Phaedra is an amazing work, so cleverly written and was 100% worth it!

Did you receive help in your preparation?

Yes, I rehearsed with Miles and the piano and had some lessons working specifically on this piece.

What are the particular difficulties of the piece?

Some people might not find it difficult but for me I would say the extremes of range, the chromatic passages and the frequent changes in time. I worked quite a lot on my character as the presentation in a piece like this makes such a difference.

Did just having the piano for accompaniment make it harder?

I am not sure really as I have not tried it with the orchestra but I would say that I probably had a lot more opportunity to practice with the piano than I would have otherwise. I would definitely like to try it with the other instruments at some point.

Are you protective of your voice?

In my own way I am but you have to live and singing is a big part of my life but not my whole life. I don’t do anything weird and I try not to worry about it too much as I am convinced you can worry yourself into frequent vocal crisis. I am not always at 100% but I always sing unless I am in a bad way, if I didn’t I would be in financial crisis! However, I do try not to party or be wild before a big performance.

Is there some repertoire you refuse to sing because it’s not healthy for the voice?

There have been a couple of occasions were composers ask for strange things to create a certain effect and I know they are not great for my voice, particularly if I have to do them repeatedly.  I usually try and find a cheat or assure the director that I will do it in performance but can certainly not sustain it in days of rehearsal.

I definitely want to do it again! I am already thinking about a programme I could make it work as part of or possibly even recording it at some point.