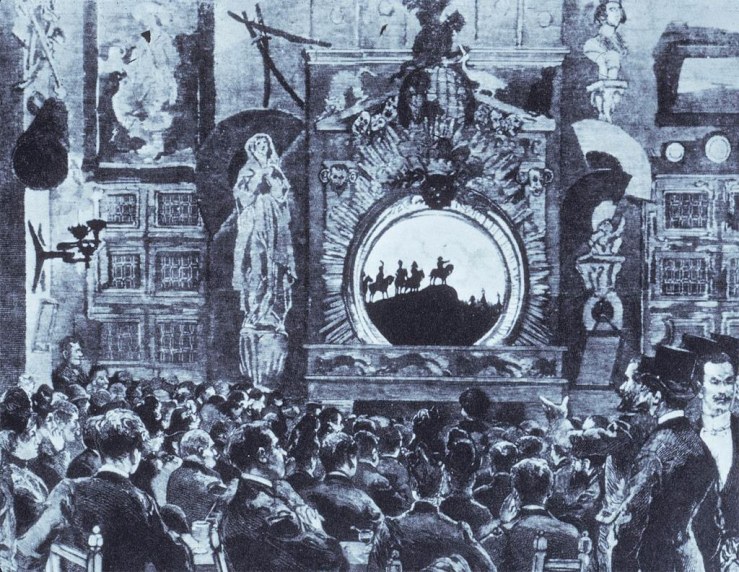 I always look forward to the Barbican Gallery’s exhibitions. Theme-based with enticing titles, they always capture my imagination. The last show I covered there, entitled Art, Intimacy and the Avant-Garde (see here LOVE IN A CREATIVE CLIMATE) in January of this year, was riveting. With the theme of power couples in art, the curators had their work cut out for them. It was an enormous show. Letters featured in great numbers, as well as paintings, sculptures, photographs and textile prints. I remember been amused by Camille Claudel’s letters to Rodin.

When I turned up to Into the Night: Cabarets and Clubs in Modern Art this week, the galleries seemed sparsely furnished in comparison.

I could see the curator’s challenge though. Cabarets and bars are all about atmosphere which is hard to evoke in paintings and photographs.

Walking up the steps, I entered Paris. Le Chat Noir corner to be precise. The cabaret sprung up in Montmartre in the late nineteenth century. Entertainment then consisted of poetry, improvised monologues and satyrical songs. The first artists and writers, who came here,  liked to call themselves ‘Hydropathes’, those afraid of water (ie wine and beer drinkers)

As Le Chat Noir grew in popularity and occupied larger premises, up sprung another source of entertainment, the Shadow theatre (see header image)

An arrangement of zinc silhouettes adorn the wall at the Barbican. It’s hard to imagine that they were used for such ambitious stagings of religious tales, epics and complete fantasies. People flocked to see these plays in a grand room hung with drawings by Claude Monet, Edgar Degas and Henri de Toulouse-Lautrec.

I run my eyes over a strange creatures with wings, a maid and a Napoleonic soldier on a horse. Later at home, I read of a production entitled L’Epopée (The Epic) performed in 1887 by Caran d’Ache at Le Chat Noir. It was a grandiose work replete with heroic Napoleonic scenes in twenty tableaux.

Back at the gallery, I peer down at the exhibition space below, where much larger recreations of the puppets, twist and turn above peoples’s heads and project large shadows upon the walls.

Still in Paris I turn my attention to dancer  Loïe Fuller, who performed at the Folies Bergère in the 1890’s. Fuller became known for her mesmeric dances, using her costume, poles and lighting to creative effect. Toulouse-Lautrec, clearly captivated by her, produced a series of hand-coloured lithographs.  In the gallery, I was particularly drawn to La Danse du Feu. It’s strange – so used are we to seeing mass-produced posters of Lautrec’s dancers, that we forget that they were of talented performers! Knowing a little about Fuller now, I will look out for her in the poster shops.

At the show, an early film features an imitator of Fuller. This dancer performs a flower dance. The effect produced is rather like peering through a child’s magic kaleidoscope.

Next I was in Vienna 1907 at the Fledermaus cabaret which was renowned for its spectacular, modern, tiled interior. Visitors at the show were treated to a recreation of the multi-coloured tiled bar, which you can admire on the lower level  of the exhibition. Gleaming tiles displayed fantastical motifs but the installation itself seemed oddly bare with no waiters or singers to animate the space. Music, which had been wafting up to the upper levels, had ceased. I think I might have missed a show!

Sticking to Europe, I peeped into the Berlin Weimar Nightlife of the 1920s and 30s. Of interest was Rudolf Schlicher’s Damenkneiper (Women’s Club), a painting depicting women dressed in men’s attire and sporting bobs. In Germany, women had got the right to vote in 1919, and were now, not only taking their liberated selves out, but foregoing masculine company as well.

Mexico of the 1920s was a welcome addition to the exhibition. At the Café de Nadie in Mexico City  radical artists and writers met to  discuss new political and social ideas following the Mexican revolution. Slogans such as ‘Chopin to the Electric Chair’ must have driven Chopin-playing pianists underground! In 1924 the radical group held its first  exhibition which embraced poetry, performance, music, woodcuts and paintings. Masks were also used, showing the movement’s attachment to ancient culture.

A celebration of indigenous culture also came up in what was to me the most interesting part of the show: the Nigerian Mbari Clubs. They came into being in the early 1960s, after Nigeria’s independence. ‘Mbari’  was an Igbo word for ‘creation’ and the first club was open-air in the university town of Ibadan. Here writers, musicians and actors congregated to read their poetry, exhibit their art and perform music and dance. Another club opened in Osogbo and became home to the Yoruba opera company. 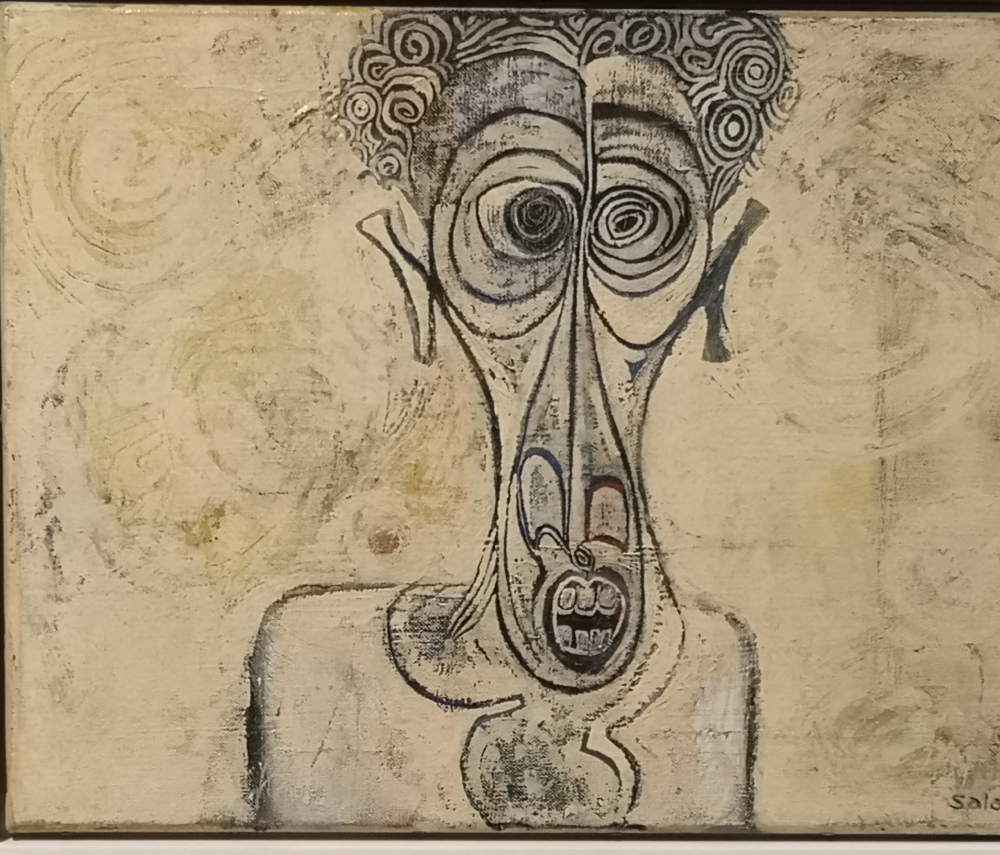 The clubs were both influenced by Western art but were rooted in their own tradition. I loved the art on display particularly an oil portrait by Ibrahim El-Salahi but also a black and white film of a performance of drumming and dance where the cheekiness of the woman dancer wanting to outdo her male dance partner is delightful to watch. The joy and exuberance of all taking part in the musical event warms the soul.

And this was the strength of this part of the show – that you could see, hear and feel the atmosphere of the club.

An imperfect show but with fascinating insights into clubs from further afield.