Artistic duos tend not to receive the attention they deserve in art history. We often read about the art movements and the artists who create them. The artist’s partner or lover meanwhile is often overlooked, or simply seen in terms of a muse.

An ambitious exhibition at the Barbican, entitled Modern Couples: Art, Intimacy and the Avant-garde seeks to explore the subject of couples and to show how spouses and lovers have had a lot more to bring to the creative pot.

I stepped in room 1 of the show where the pairings of Auguste Rodin and Camille Claudel and Maria Martins and Marcel Duchamp were considered. Both couples had passionate affairs – it seemed a good place to start. 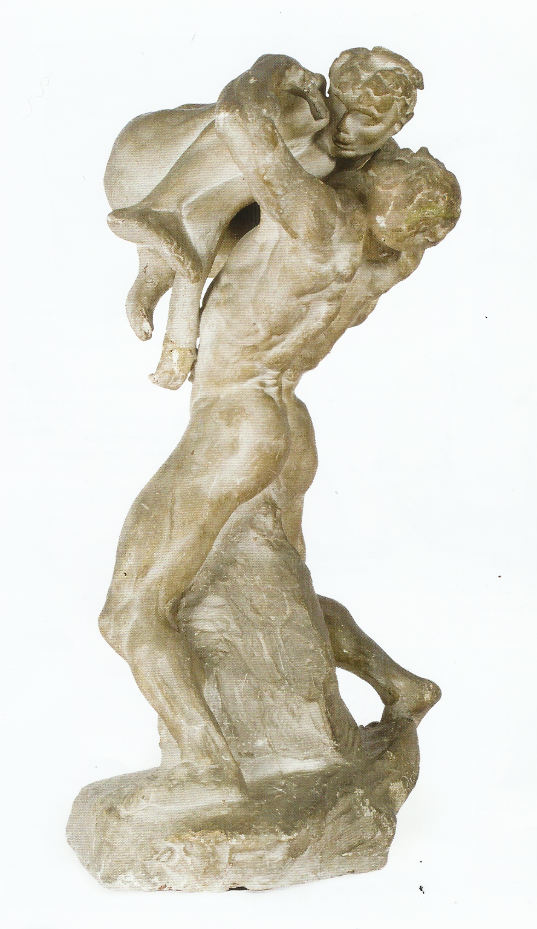 I was called upon to contemplate Auguste Rodin’s exuberant sculpture, Je Suis Belle. A beautiful naked young woman, bunched up into a ball, is held aloft by a tall, muscle-bound Adonis (In reality Auguste Rodin was small and lame!) The energy of the piece perfectly encapsulates love’s rapture and exemplifies Rodin’s superhuman passion for his eighteen-year old assistant.

Camille Claudel’s letters on display reveal her minx-like hold over him in the early years of their affair. In one she asks Rodin to buy her a two-piece bathing suit in serge from Bon Marché so that she can swim in the lake and avoid the public baths! And to excite him further she states: ‘I go to bed naked every night to make me think you’re here’.

The correspondence in this show is riveting  and should not be overlooked even though it may slow your progress through the rooms!

Though the odds were stacked against Claudel, she was a mere woman after all, Claudel’s talent was recognised by her mature lover. He allowed her to fashion the hands and feet of his statues. In the show we see the clay head Claudel produced of him. I found it disappointing and decided to go to the Rodin museum next time I was in Paris to investigate further.

I turned to another female artist, Maria Martins, occupying the same room. Before meeting Marcel Duchamp in New York in March 1943, she was already a sculptor in her own right. Her bronze cast entitled  Le Couple , produced in the same year, is impressive. Two animalistic male-female forms rear up and spew tendrils. Their bodies arch away from each other (Martins as a married woman clearly had some reservations about the affair!) In contrast, Marcel Duchamp’s artistic offering is less showy. Five mysterious artefacts are displayed in a glass case. One resembles part of a bronze shoe, Feuille de Vigne, 1950. I read the explanation and find that it is in fact an imprint of Martins’s female genitalia! The five pieces together are all imprints of Martins intimate parts. They are strangely elegant, oddly moving.

Sexual desire and the artistic impulse are of course closely linked. I am drawn to the Surrealist section entitled Mad Love where André Breton, founder of the movement, encourages his male followers to go out into the street in search of love. Breton saw women as innately ‘surrealist’. The theme of the female muse resurges. The women associated with Surrealist artists were no shrinking violets however. In the photographs they come across as wild and free. In one they are relaxing at a picnic, sheets draped over their  intimate parts. Their male friends meanwhile are fully clothed! The photograph is no doubt the surrealist take on Manet’s painting,  Dejeuner sur L’Herbe.

One of these women is the American photographer Lee Miller. Early on in her career she teamed up with avant-garde artist Man Ray. In the show they occupy a room of their own. Their homage to the Marquis de Sade seems tongue in cheek. A very young Miller wears a thick iron collar around her neck. In another very strange image Lee Miller and Man Ray have placed a glass dome over their heads! I can’t help but laugh!

Lee Miller’s photographs could also be moving and poignant. In the Dora Maar-Picasso section, we see an older Dora Maar sitting alone in her apartment looking into space. In the centre of the picture hangs a painting Picasso made of her. It is a rare portrait of her facing out at the viewer (rather than in profile), and it is the only portrait she liked of herself. She dismissed the others as ‘lies’. They may be ‘lies’ but Picasso’s Portrait de Femme 1938, of Maar, is still a wonder to behold on an adjacent wall, as is Frida Kahlo’s oil painting entitled The Wounded Deer 1946 located in the same room 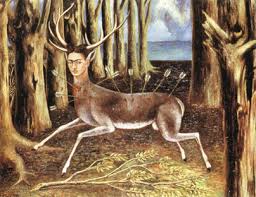 To counterbalance the theme of suffering female artists, Maar’s own photo images of Picasso have been included in the show. A glass plate negative of Picasso caught my eye. Around his face Maar has scratched a halo or crown of thorns of black ink. It gives the painter the air of a saint or more worryingly, the appearance of Jesus Christ bound for crucifixion. It is unusual to see Picasso objectified in this way. So much with Picasso was on his terms.

Alma Mahler in another room seems to be made of sterner stuff. The exhibition focuses on her relationship with husband Gustav Mahler and lover Oskar Kokoschka. Long suffering muse, she was not! A photograph of her shows a Valkyrien woman in a corseted dress and dark, expressive eyes.  She was a talented pianist and composer when she met Mahler. It is surprising to read therefore that at the beginning of her marriage to Mahler she gave up her musical career at his request. It was a big mistake of course; outwardly acquiescing, Alma soon grew bitter. When she was on the point of running off with Bauhaus architect Gropius, Mahler agreed to play and help publish his wife’s lieder which are on show.

The painter Kokoschka, seven years her junior, filled the void after Mahler’s death. ‘He painted me, me, me!’ Alma Mahler exclaims in a quote on the wall. Kokoschka joined up as a soldier in WW1, perhaps to escape her intensity and jealous nature. On his return however he underwent a change of heart. By then Alma had gravitated towards Gropius again. Kokoschka spent the next few years trying to win her back. The painted fans he produced, depicting their life together, are on display on one wall. We read about a doll he had made in her image. ‘I must have you for my wife or my genius will self-destruct’, he says in a letter. Alma’s power over men was astounding!

The Sapphic section entitled Chloe liked Olivia, was not only illuminating but revealed a whole host of new writers for me such as Natalie-Clifford Barney and painter Romaine Brooks. I was already aware of the love affair between blue stocking Virginia Woolf and aristocrat Vita-Sackville West, but it was interesting to learn of the influence each woman had on the other’s work. The desire Sackville-West ignited in Woolf powered Woolf’s Orlando. In this tale a young man transforms into a woman and retains his love for women. Sackville-West’s writing meanwhile became more experimental. Her book Seducers in Ecuador is on display together with Orlando and Woolf’s wonderful extended essay, A Room of One’s Own.

By the time I reached the painter Klimt and designer and fashion muse Emily Flöge (also fascinating if I had had more time) I was replete with information. I had only covered the first floor of the exhibition! (There are two!)

The show warrants a whole afternoon with two tea breaks!

Modern Couples is an exhilarating show. A real curatorial tour de force. I am now keen to read up about L’Académie des Femmes (the feminine equivalent of the all-male literary Académie Française), and to explore the art of lesbian painter Romaine Brooks whose self-portraits reveal a growing confidence in her new sexuality. From a timid, thin-faced girl in a graceless hat she evolves into a beautiful, bright-eyed woman with wind-swept hair. I felt happy for her.

Hats off to the Barbican for a thought-provoking and rich experience! Worth joining the Barbican Centre membership scheme methinks!

‘Modern Couples: Art, Intimacy and the Avant-garde’ is on at the Barbican (Floor 3) until 27 Jan.