Growing anxiety about coronavirus was absent at the Victoria & Albert Museum on Saturday afternoon when I viewed the new Kimono: Kyoto to Catwalk exhibition. It was packed, people edging around one another to take a closer look at the sumptuous silks and exotic garments, including kimono worn by pop icons Madonna and Björk, and kimono-inspired haute-couture designs by Yves Saint Laurent, Rei Kawakubo and John Galliano. The exhibition was heaving, and rightly so, because it’s absolutely glorious. 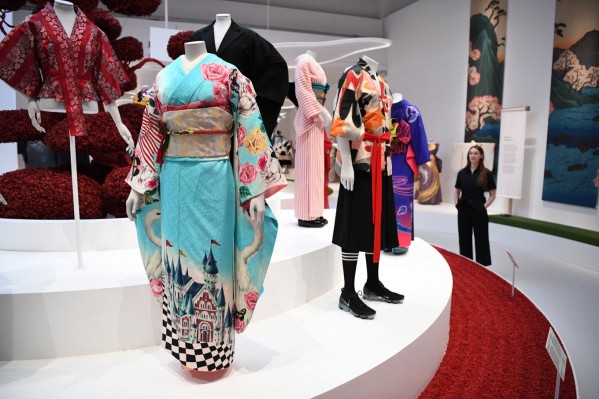 The V&A does fashion and fashion-related exhibitions really well, and Kimono is no exception, its presentation and layout designed to guide the visitor through the history of the kimono in Japan, from its sartorial and social significance in the 1660s to its growing influence on Western fashion, through orientalism and ‘Japonism’, and the metamorphosis of the basic kimono design into a modern fashion statement.

The kimono is a simple garment made from single bolts of cloth cut into seven straight pieces, and the emphasis is on what is happening on the surface of the cloth rather than the body enclosed within it. In 17th-century Japan the kimono was taken up by the affluent mercantile class who demanded visible indicators of their wealth, stature and taste. These, along with leading kabuki actors and famous courtesans, were the trendsetters of their time, and the kimono on display in this section of the exhibition are luxuriant garments in lavish, vibrant fabrics. The simple structure of the kimono was – and still is – scope for sumptuous patterns using sophisticated techniques such as stenciling and incorporating symbolic motifs, and it is clear from these items that a cult of celebrity, encouraged by makers, sellers and publishers, fed the craze for the latest in kimono fashion. Amongst the beautiful kimonos for men and women are those for children and also samurai.

As Japan opened up to the rest of the world, the kimono became part of a cultural exchange as imported fabrics – brocade from France and chintz from India – were incorporated into kimono design, and kimonos were exported to the West. By the 19th century, the global craze for Japanese art and design, and orientalism in general, the kimono became a prized object of cultural appropriation and a symbol of its wearer’s artistic flair. London department store Liberty & Co produced kimono, and Japan responded by creating richly embroidered “kimono for foreigners”. The garment also appeared in art at this time and the influence of Japan and the East is seen in interior design as well. But it was in the 20th century that the kimono enjoyed its greatest influence on Western fashion. Designers such as Poiret, Vionnet and Fortuny created gowns which clearly drew on the kimono design, with its high-waisted distinctive sash, or obi, abandoning the tightly-corsetted silhouette of the 19th century in favour of looser, more fluid clothing. There are some stunning examples on display in this section of the exhibition, including a striking acid-yellow mantle by Poiret which would not look out of place on the catwalk today. 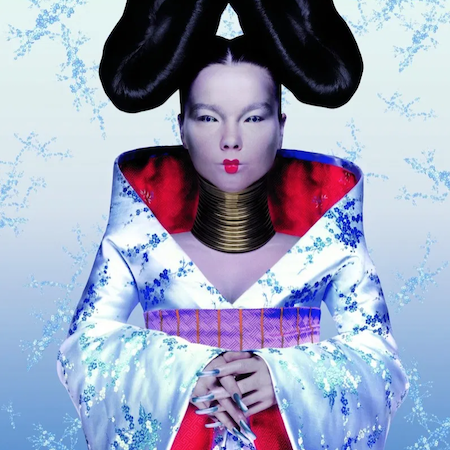 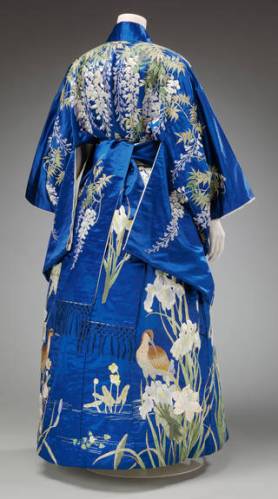 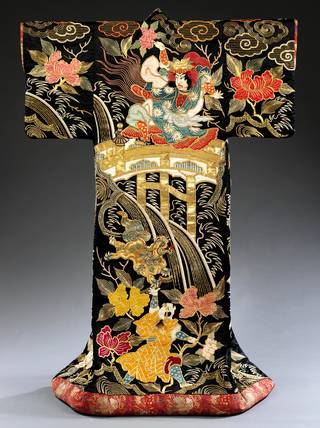 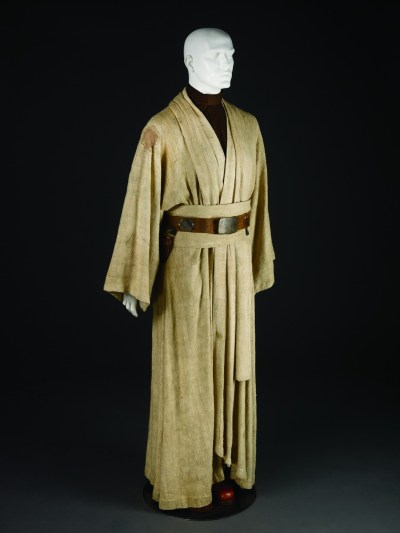 The final section of the exhibition examines the kimono as a fashion garment in contemporary culture and how it continues to inspire designers today. The simplicity of the kimono’s design allows for intriguing, playful and witty transformations by fashion designers such as Thom Browne, Duro Olowu and Yohji Yamamoto. As a timeless, instantly-recognisable, universal garment, it has also been taken up by costume designers, and visitors can see the kimono worn by Obi-Wan Kenobi in George Lucas’ Star Wars films. Part Buddhist monk and noble samurai (played by Alec Guinness), the kimono is the ideal garment for this character. Here also are a bright crimson kimono, designed for Madonna by Jean-Paul Gaultier, and a kimono-style dress created by Alexander McQueen for Bjork for her album Homogenic.

Interestingly, the western craze for the kimono, from catwalk fashion to a comfortable, casual dressing gown to be worn at home, runs parallel to a resurgence of popularity for the garment back in Japan with young people choosing to wear kimonos as a reaction against ubiquitous Western fast fashion.

The exhibition really is an embarrassment of riches, with some 300 kimono on display, including some rare 17th-century examples which have never been seen outside Japan, along with accessories such as the obi (sash), purses, netsuke, and vanity cases, pictures and prints (which were used to advertise kimono), setting the garment in both its historical and contemporary cultural context. All the kimono are beautifully displayed, showing their colourful fabrics and designs (including one inspired by Charles Rennie Mackintosh, and another celebrating a new  kamikaze aeroplane). In some of the rooms, mirrors placed above the display cases create an endless array of kimono, reflecting back on one another, and fashion mannequins allow an almost 360-degree view of modern designer kimono, and kimono-inspired clothing, including outfits for men.

This is the first major exhibition of kimono in Europe, and it’s a magnificent celebration of the timelessness, universality and enduring appeal of the kimono.