Ah, Norway. Fjords, trolls, Ibsen; and birthplace in 1869 of Harald Sohlberg, whose atmospheric and alluring landscapes are on exhibition at Dulwich Picture Gallery until June. If you like Scandi-noir, you will love this.

Norway, like Switzerland, has one of the most beautiful and (you would think) artistically inspiring landscapes on earth; so it’s a puzzle why both countries have produced so few landscape painters. Most of us, I think, would be hard put to come up with the name of any Norwegian painter, beyond that of Munch. Munch was Sohlberg’s contemporary, and there are similarities between the two – the influence of the Symbolists such as Paul Gauguin (much as both men might have denied it); but above all, in this show, the influence of the Norwegian landscape itself. Snow-covered mountains glowing under the Nordic moon, legions of pine-trees, and that Scandinavian relish, product of the long monochrome winters, for deep, vivid colour – red-painted houses, leaning under the weight of snow, the glow of a sunset, distant hills of hallucinogenic violet, and the gold of a candle-lit window. Sohlberg also does a particularly wonderful job of getting onto canvas the luminescence and the colours of the midnight sun, a phenomenon which is completely unbelievable if you haven’t seen it for real, but Sohlberg catches it perfectly. His Fisherman’s Cottage of 1906 is a sort of summation of these traits, and of the cleverness with which his paintings are constructed. The foreshore dips down, the trees, painted with such thick impasto that their trunks have cracked, have just enough space between them to let you through, and there is the little bright cottage, inviting you come in from the cold. 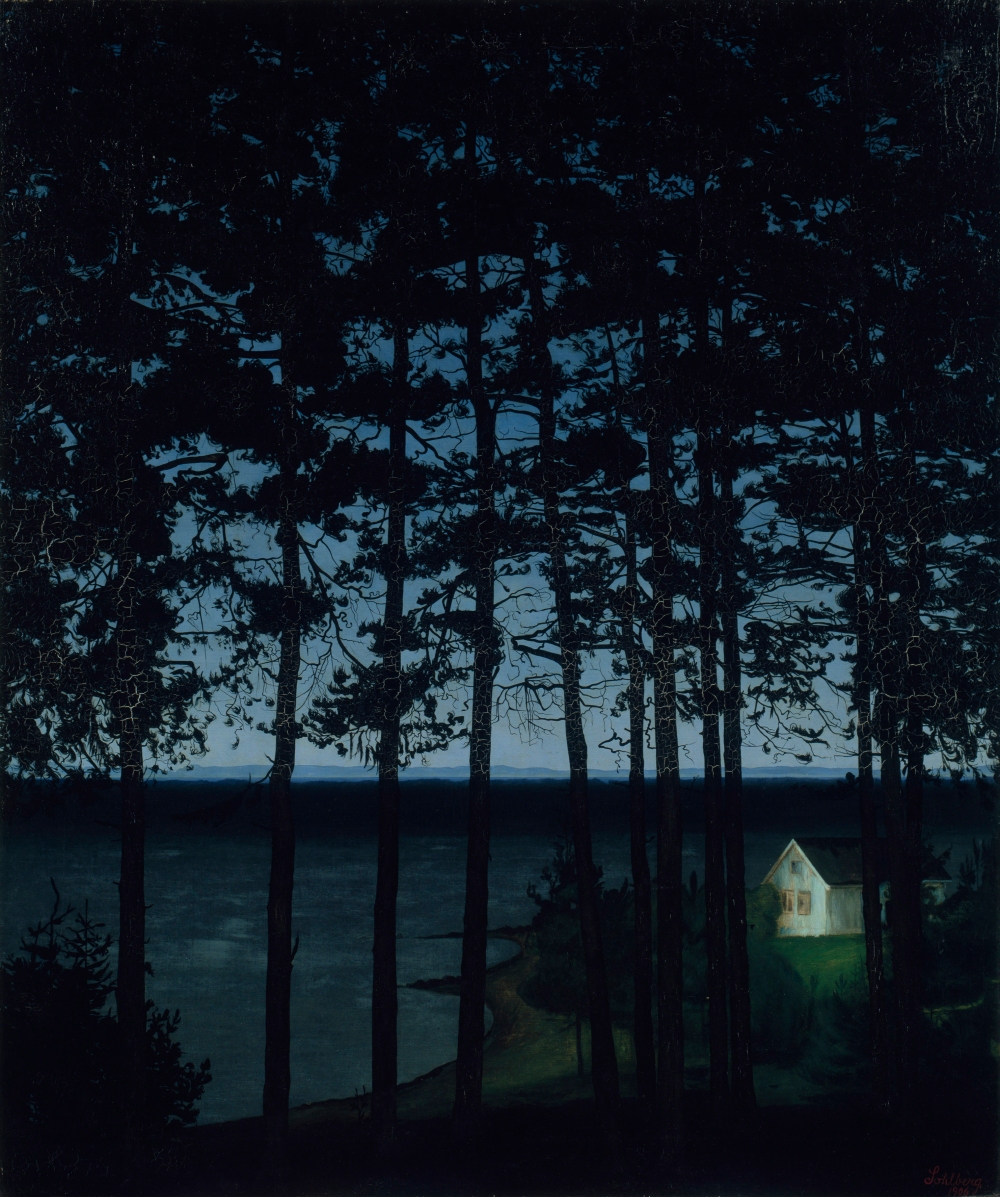 Sohlberg initially trained as a painter of scenery and there is a scenic sense of layering in his works. The foregrounds have that hyper-detailed, Rackham-esque quality; the mid-ground lures you to walk down that path or up that road; in the distance there is some vast new vista to aim for. You can see exactly why his paintings lend themselves so well to being cover-images for novels; thrillers in particular, perhaps. And nothing in them is there by accident. Winter on the Balcony, perhaps the same balcony from which the artist watched the midnight sun, is so lightly painted that the squaring-up of the canvas is still visible, as is the care with which Sohlberg constructed the wooden exterior of the building and the balcony itself – the tightness of their carpentry hinting at the meticulousness with which you had to create habitations for yourself in this landscape and this weather. There is a sense in these works of the landscape giving form to thought, a quality that puts you in mind immediately of the similarly curious, almost uninhabited cityscapes of Atkinson Grimshaw.

Harald Sohlberg, Street in Røros in Winter, 1903, The National Museum of Art, Architecture and Design, Norway.

Sohlberg’s drawings are as cunningly constructed as his paintings. There are two drawings in particular in this show – one, the side of a clapboard cottage in charcoal and pencil, and the other, of a girl, a rare inhabitant, looking over a fence in a backyard – that are quite breathtaking. The backyard is one little world, yet behind it there rears the impervious façade of a 19th-century apartment block, so that you have the entire life and history of a city in just three elements. Sohlberg was painting at a time when the rural industries of Norway – fishing, mining, and the landscapes they existed in – were being transformed by the technological changes of the early 20thcentury, and while there is no consciousness in any of these works of the revolutions and conflict that were going on in the rest of Europe at the time, they have an undertone; there are details that unsettle and perturb. Night, Roros Church, for example, painted looking down into the sleeping town, seems so peaceful, and there is that one comforting beam of light coming from a window at the top of the church itself, but then you look at the tombstones scattered over the uneven ground before you, the rough black crosses, and you realize where the artist had placed himself – back here, amongst the dead.

Dulwich is on something of a roll with exhibitions such as this – first showings, unexpected works, and unexpected artists, too. There was Escher in 2015, Tove Jansson in 2017, Jusepe de Ribera and Edward Bawden in 2018, and now Sohlberg is another – and another not to miss.

At top: Harald Sohlberg, Winter Night in the Mountains, 1914, The National Museum of Art, Architecture and Design, Norway.