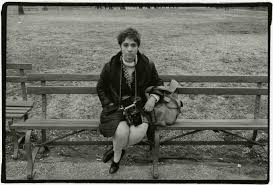 Diane Arbus remains a giant in the photography world. Her suicide at the age of 48 has contributed to her legendary status. Hailed as a tormented genius, much has been written about her psychological fragility and her obsession with documenting New York’s outcasts.

She wasn’t the first to focus on the rough bars, strippers and burlesque performers. Documentary photography was well established as a genre by the time Arbus took to the streets in 1956, leaving the world of fashion photography behind her. Many male photographers had already revealed the underbelly of New York society. Magnificent photographers like Walker Evans, Weegee, Friedlander, Garry Winogrand, all of whom Arbus much admired. Her way of working however was different.

Whereas her male colleagues sought to make themselves invisible to the subjects they snapped, going to great lengths to bury their cameras inside their coats or install false lenses, Diane made no effort to hide what she was doing.

It was hard for her at first. She was of a shy disposition, a lone woman. She had to conquer her fears, her prejudices in pursuit of her art. She struck up conversations with the people she photographed. Some of the relationships she formed with them lasted for years.

In a show entitled diane arbus: In the beginning, the Hayward Gallery, with the aid of The Metropolitan Museum of Art, New York, has focused on Diane Arbus’s early years, when she was prolific and trying to develop her own particular brand of portraiture.

The first room of the show surprises with the compact sized black and white prints Arbus produced herself. Arbus’s images are smaller than an A4 size sheet of paper but are displayed artfully on separate rectangular panels. Very soon my eye adjusts to their dimensions.  Arbus’s subjects appear in half-shadow in bars, shabby hotel rooms and burlesque shows. I soon grow restless. Have I seen too many of these sorts of photographs over the years? I remind myself that at the time, Arbus’s photographs of female impersonators making up in front of a mirror would have been groundbreaking and shocking.

However the daylight shots catch my eye. Kid in black face, NYC 1957 stops me in my tracks. A blacked up boy in the street. Is he going to a black and white minstrel birthday party? Has he fallen down a coal hole? The only white we can see is the slits of his eyes, his lips and a slither of shirt. An arm is tugging at his shoulder. Not only is the image shocking but it is mysterious.

In Five members of The Monster Fan Club NYC1961 a group of boys sit on the front steps of a house. The humorous title shows Arbus in a more playful mood but then we focus on the sinister masks.

Arbus was a devoted mother but her pictures of children are for the main part unsettling. Child teasing another. NYC 1960 is at first charming but the more you look, the more the little boy hunching his shoulders as an older girl whispers in his ear, looks uncomfortable. 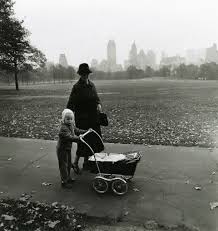 With ‘Girl and governess with baby carriage, 1962, a blonde toddler pushes her own baby carriage in a park. Alongside her governess, neatly dressed in a winter coat, hat and sensible handbag helps her push the carriage along. Far on the horizon the New York skyscrapers rise up in the early morning mist. Here the mood is nostalgic rather than uneasy.

It makes me think of the biography I have just read on Diane Arbus. Arbus felt neglected by her parents growing up in New York. Her father David Nemerov, owned an opulent department store in Fifth Avenue. Intent on keeping up appearances, her father was always working and entertaining. Her mother meanwhile, the beautiful Gertrude Nemerov, spent her time shouting at the servants in their grand apartment or chatting on the phone. The only person who seemed to show any interest in Diane was Mamselle, a cool, undemonstrative, beautiful French governess. Seven-year-old Diane loved her walks in Central Park with her and was inconsolable when her nanny left the Nemerov household.

There is no doubt that this picture meant something to Diane. It speaks of security and growing independence under the watchful eye of a loving, responsible adult. It speaks of snatched moments of happiness in an otherwise lonely childhood.

The iconic Child with a toy hand grenade in Central Park 1962 follows. A bony-legged boy with claw-like fingers grips a grenade in his right hand. I know where I’ve seen those wild-staring eyes before – in war photography. This famous picture still packs a punch. The larger square format Diane uses marks a change in direction. Using a Rolleiflex camera she has now produces direct eye contact with her subject. 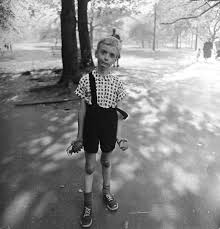 The exhibition builds up to a crescendo in a separate gallery entitled A box of ten photographs. These last images taken by Arbus in the late 60s and early 70s form the pinnacle of her work. Identical twins, a giant stooping over his tiny parents in their sitting room. A couple in a nudist camp, the man sitting in an armchair with his legs apart. Young parents with children – their little boy is blind. A Mexican dwarf, sitting up in bed and proudly displaying his smooth chest. The subjects seem more at ease in front of Arbus’s camera, as if now, they have come of age.

Sadly these beautiful photographs were developed after Diane’s death for a retrospective of her work at the Metropolitan Museum of Art.

This is a thought-provoking show but for me it was lacking in something. That something was more about Diane Arbus herself. The catalogue on sale contains her notebooks where she scrawls her inner thoughts. It would have been useful to have these on display.

An American friend of mine recently spoke of an Arbus retrospective in San Francisco way back in 2003. At the show they had reconstructed Arbus’s studio, showed her working notes, cameras and also the books she read for inspiration. I would have loved to have had glimpses of her inner world.

That said, the Hayward has produced a neat exhibition with a clear purpose. Some of the photographs on display have never been shown in Europe before and they clearly chart Arbus’s evolution from street photographer to a portrait artist of immense vision.

diane arbus: in the beginning runs until 6thMay 2019 at the Hayward Gallery.

If you want to learn more about Arbus’s life : Diane Arbus, a biography by Patricia Bosworth is an excellent read.